How to Rock a Pair of Leather Capris 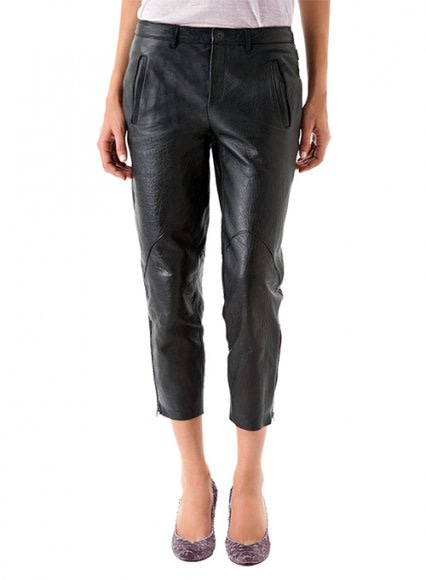 Are you ready to take your fashion game to the next level? If so, perhaps you should invest in a pair of leather capris. They are constructed of the same genuine and high-quality leather as other leather pants. Rather than extending all the way to your feet, though, leather capris stop a few inches shy of your ankles when worn. Although it’s a subtle difference, many women prefer the unique style offered by leather capris.

The Basics of Leather Capris

Before revealing the right way to wear leather capris, let’s take a closer look at this garment. Also known as highwaters or flood pants, capris are essentially short pants. They are longer than traditional shorts but shorter than full-length pants. As previously mentioned, most capris stop a few inches above the ankles when worn. Leather capris follow this same style, with the only difference being that they are made of leather.

Leather capris are relatively new. Capris, in fact, didn’t appear until the 1950s, during which they were worn by English socialite Bunny Rogers. In the years to follow, other people took notice of Rogers’ capris.

Something else to consider when browsing retailers in search of leather capris is the length. Leather capris aren’t available in full-length styles. After all, a partial length is what distinguishes capris from traditional pants. With that said, you can find leather capris in different lengths. Therefore, it’s important to identify your desired length so that you’ll be able to choose the right pair of leather capris.

The longer your capris, the more of your legs they’ll cover when worn. During the winter, a pair of long-length capris will offer greater protection against the cold weather. During the warmer seasons of the year, on the other hand, you may want to choose leather capris in a slightly shorter length. Either way, all leather capris are shorter than full-length pants.

Regardless of the length, you should accessorize your leather capris with a belt to create a more complete look. A belt is a multipurpose accessory that offers several benefits. First, it helps to prevent your leather capris from falling down. If they are too large in the waist, they may fall down without a belt. Second, a belt allows you to introduce new colors into your outfit. You can sport a red belt with a pair of black leather capris, for example, to create an attractive color combination that stands out.

While they don’t develop wrinkles as easily as other pants or trousers, leather capris can still wrinkle if not properly maintained. If your leather capris are wrinkles, you should avoid wearing them. Instead, encourage them to smooth so that the wrinkles are no longer visible.

Like all garments made of genuine leather, leather capris require conditioning to prevent them from drying out. Genuine like is like a sponge. It contains a porous surface that absorbs moisture from its surroundings. Conversely, genuine leather may release moisture from its porous surface. It’s a natural phenomenon that occurs when leather — or any porous object for that matter — is placed in a dry environment.

To prevent your leather capris from drying out, you’ll need to condition them. Conditioning refers to the use of a hydrating cream or lotion that’s designed specifically for leather. You apply the “conditioner” to the surface of your leather capris, at which point it will hydrate them.

Don’t forget to choose the right top when wearing leather capris. If your top clashes with your leather capris, it won’t look right. Your shirt and leather capris will clash with each other while dragging down the aesthetics of your outfit in the process.

Many women assume that their top must match their leather capris. If they wear black capris, for example, they assume they must wear a black top. While you can always choose a matching top with which to wear your leather capris, a better idea is to venture into the realm of a different color. You can choose a top in a color that contrasts with your leather capris. Rather than a black shirt, consider wearing a white shirt. Even though it’s on the opposite end of the color spectrum, it will flow with your black capris to ensure an attractive outfit.