CUSTOMIZED FOR YOU
Cancel

Add something exciting and rocking to your leather collection with our replica leather set of jacket and trouser, inspired by the famous and charming American singer, songwriter and actor Nick Jonas. At the age of seven Jonas began acting in theater, and released his debut single in 2002 which caught the attention of Columbia Records where Jonas formed a band with his older brothers. In 2017, Jonas appeared in an adventure comedy film Jumanji: Welcome To The Jungle, which became the fifth highest-grossing film of the year.

While performing at the MTV Video Music Awards 2016 at Madison Square Garden , Nick was spotted wearing this unique yet super cool looking leather set of jacket and trouser.

The set of jacket and trouser is indeed a beauty which tends to be something out of the box and is also perfect to enhance your personality , allowing you to become centre of attraction in every social gathering that you go to.

Made using 100% Pure Napa Leather, this set of jacket and trouser can be made as per your measurements or you can select from our Ready Sizing options.

We have selected the best color for you which is a bit similar to this set of jacket and trouser, however you can even change by selecting the one of your choice. 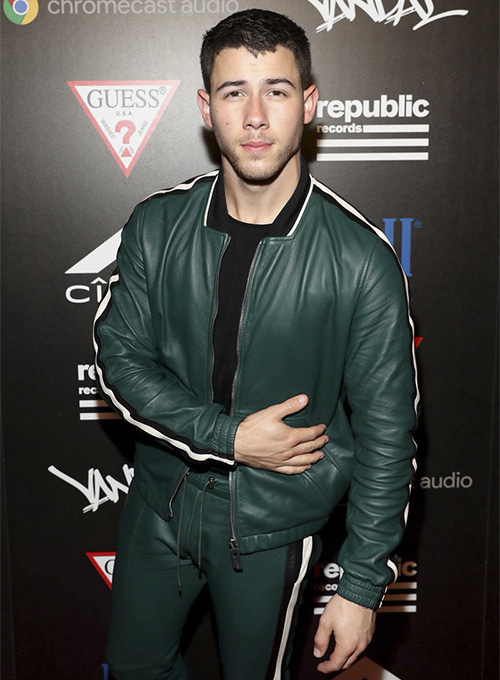 5 of 5 Stars!
Suit arrived sooner than I thought and it looks great and fits perfectly. Receive a lot of good compliments for the set. Have recommended Leather Cult to friends and family.
Write Review